This Vanilla Cheesecake is smooth, creamy, and perfect plain or with any topping! It’s easy to make and don’t be intimidated by the water bath! It’s what makes a good cheesecake!

It’s hard to beat classic recipes and a simple classic vanilla cheesecake is one of them! I have always steered clear of baked cheesecakes because of the water bath and even tried several recipes claiming you don’t need a water bath, but guess what….you do! They would crack or not have quite the right texture.

And you know what else….it really isn’t that hard! I don’t know why they scared me away all these years. I have made plenty of no-bake cheesecakes like this No Bake Vanilla Cheesecake or even this rich and decadent Dark Chocolate Peanut Butter No Bake Cheesecake. But if you are looking for that traditional cheesecake this recipe is for you!

GRAHAM CRACKER CRUMBS, BUTTER, SUGAR: All used to make a delicious homemade graham cracker crust. Readers outside the US use digestive biscuits.
CREAM CHEESE: It is crucial to use block-style cream cheese and not the kind found in a tub. Spreadable cream cheese has extra ingredients added and not suitable for this recipe. Also, reduced fat is not recommended for this recipe! Sorry no diets here, lol!

SOUR CREAM: I like the addition of sour cream because it lightens up the cheesecake a bit so it isn’t quite as dense.
SUGAR: I found 1 cup to be plenty. It was just enough to sweeten the cheesecake but not be overwhelming.

VANILLA: Used to flavor the cheesecake. If you want to use vanilla bean or vanilla bean paste instead of extract that would be fabulous!!
EGGS: Help bind everything together.

How To Make Vanilla Cheesecake

CRUST: In a medium bowl mix together the graham cracker crumbs, sugar, melted butter, and salt. I like to add just a pinch of salt to the crust for just a bit of that sweet and salty bite. Leave it out if you prefer. Pack this tightly into a 9-inch springform pan wrapped in foil. Bake for 10 minutes.

CHEESECAKE FILLING: Beat the cream cheese and sugar together until smooth and creamy. Stir in the sour cream and vanilla scraping the sides often. One at a time stir in the eggs just until combined, scraping often. Spoon into prepared crust.

WATER BATH: While you are preparing the filling heat several cups of water. Place a large roaster pan in your oven, set the cheesecake in the center, and carefully pour in the hot water. The water should come halfway up the cheesecake. I know you may want to skip the water bath step but cheesecake loves a humid environment and this helps prevent cracks along with not overmixing.

COOLING: After the cheesecake has baked turn off the oven and crack the door but don’t remove the cheesecake. This allows the cheesecake to slowly finish cooking and slowly start to cool off which is another great tool to combat cracks. Drastic changes in temperature aren’t good for cheesecake.

WHY DID MY CHEESECAKE CRACK?

HOW DO I FIX A CRACKED CHEESECAKE?

Cracks can happen and when they do, don’t despair, the cheesecake will still taste fabulous! You can cover them up with fresh fruit, fruit sauces, or a yummy sour cream topping.

HOW TO FREEZE CHEESECAKE?

1. Allow the cheesecake to fully cool at room temperature.
2. Remove the outer ring of the springform pan.
3. Wrap the cheesecake in a couple of layers of plastic wrap and then in heavy-duty foil.
4. Freeze for up to 3 months. Thaw overnight in the refrigerator.

Tips For The Perfect Vanilla Cheesecake

There are countless toppings you can use with this classic vanilla cheesecake. Use a sour cream topping and this works really well if your cheesecake is cracked. Combine 2 cups room temperature sour cream, 1/2 cup confectioners sugar, and 1/2 teaspoon vanilla. Spread over the top of the cooled cheesecake. 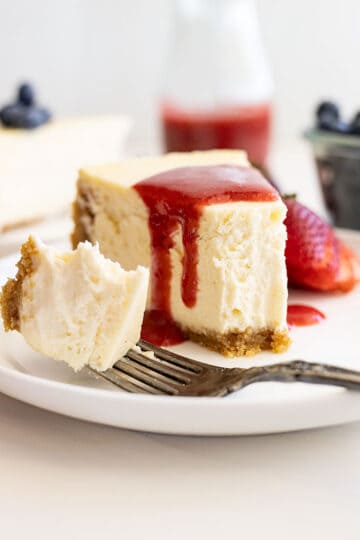 This Vanilla Cheesecake is smooth, creamy, and perfect plain or with any topping! It's easy to make and don't be intimidated by the water bath! It's what makes a good cheesecake!