Jump to Recipe Leave a Review 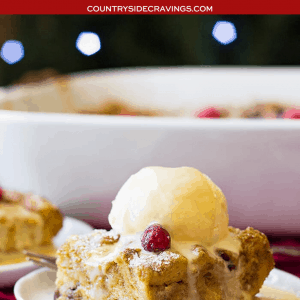 This Cranberry Bread Pudding with Whiskey Cream Sauce is an indulgent dessert! Brioche bread baked in a cinnamon custard then topped with a whiskey cream sauce!

This cranberry bread pudding with whiskey cream sauce is the perfect Christmas dessert! Or the perfect dessert for anytime really.

It’s rich brioche bread baked in a cinnamon custard studded with dried cranberries. Then to make it even more indulgent, top it with a scoop of ice cream and drizzle it with the whiskey cream sauce or caramel sauce.

You could also serve this for a brunch as an overnight french toast casserole since they are pretty much the same thing.

So, are all of you getting excited yet?? Christmas will be here shortly and my kiddos keep reminding me daily. I still have to finish all of my shopping, yikes!!

In past years I was more on top of things and would have everything bought Thanksgiving weekend. It was so nice to have it all done and able to put a big fat check next to it.

This year things have been a little bit on the crazy side and I am only about half done with my shopping. But at least I’m that far!

I just need to take one day and buckle down and get it finished. Anyway, I have been creating many yummy Christmas treats! So stay tuned for some DIY Christmas food gifts this week.

About this Cranberry Bread Pudding with Whiskey Cream Sauce:

This Cranberry Bread Pudding with Whiskey Cream Sauce is an indulgent dessert! Brioche bread baked in a cinnamon custard then topped with a whiskey cream sauce!

This recipe is adapted from my grandma’s bread pudding and the whiskey sauce from Foodiecrush.