This No Bake Vanilla Cheesecake is incredibly smooth! It’s rich, light, creamy and will go great with loads of toppings! 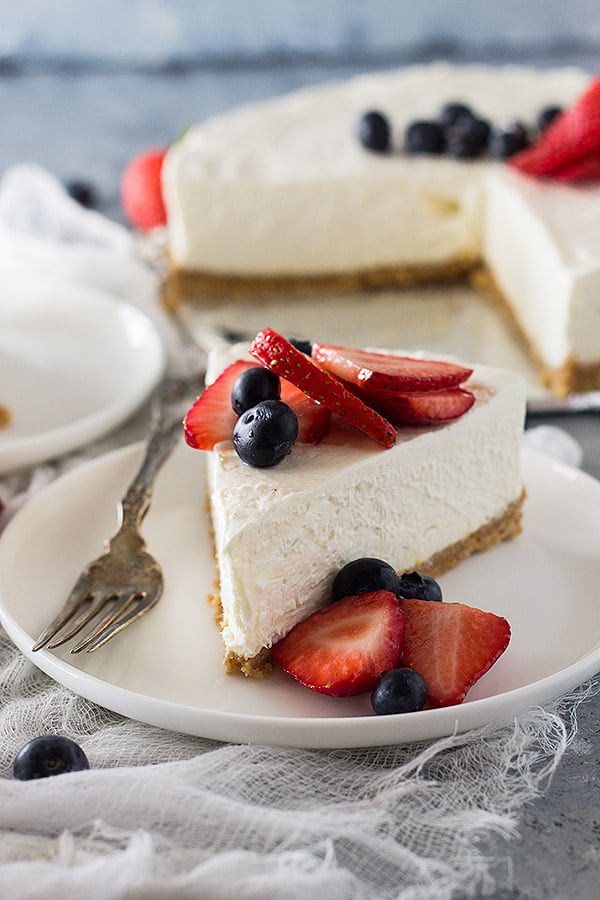 I have another great recipe for the back to the basics series!!  This no bake vanilla cheesecake!  It’s so smooth, creamy and perfect for beginners.  It’s much easier to make than the traditional baked cheesecake.

Now, for a little disclaimer: no bake cheesecakes and traditional baked cheesecakes taste different.  I just wanted to let you know right away that they are not the same.

I love them both and to be honest I probably like the no bake a little better.  It’s lighter and not quite as heavy making it perfect for a light summer dessert. 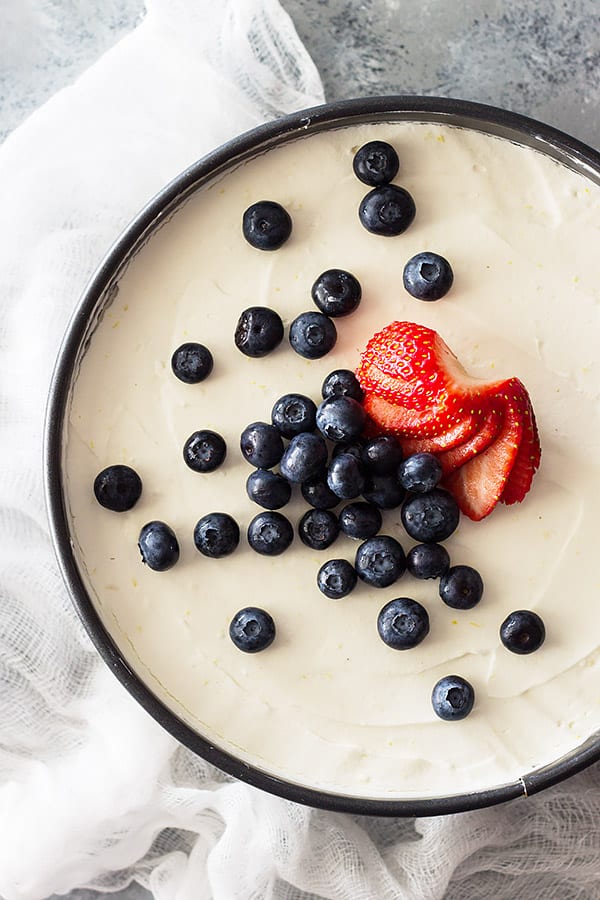 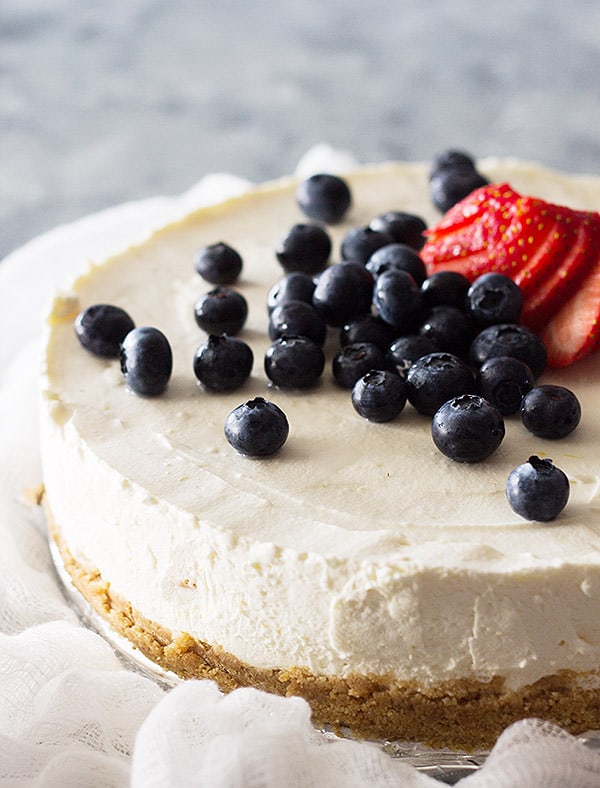 What is a no bake cheesecake anyway???

It is a cheesecake that requires no baking.  It contains no eggs and no granulated sugar.  Yet it’s still rich and tangy from the cream cheese and it’s smooth and creamy!  Genius I say!  The filling is a lot softer than the traditional baked cheesecake giving it a light and airy texture.

This recipe also doesn’t require the use of gelatin like many other no bake cheesecakes call for.  I haven’t found the need for it and I never have it on hand.  However, don’t let this cheesecake sit out on your counter for more than 1 hour and even less on a hot day.  Since there isn’t any gelatin to help keep its shape it will start to become extremely soft much quicker. 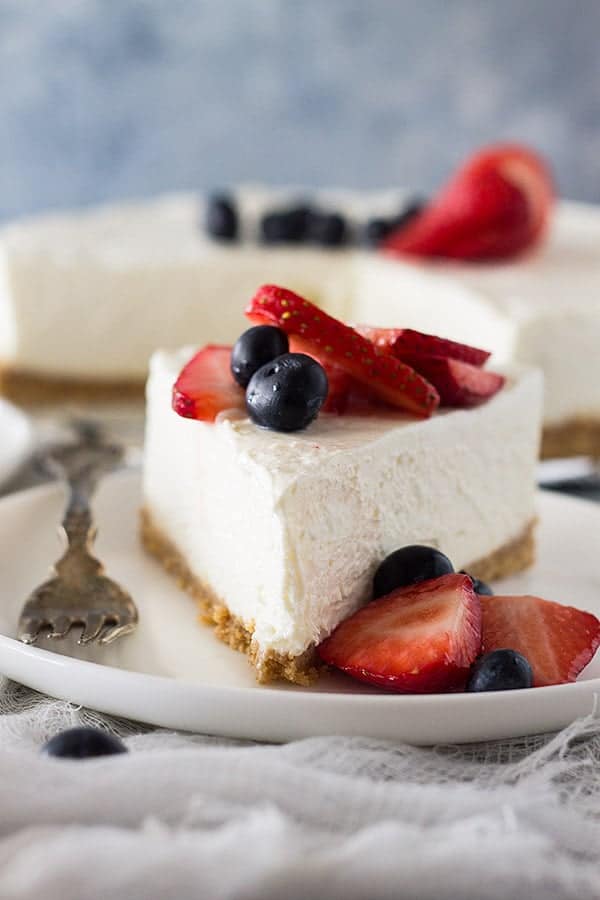 A few tips to make this No Bake Vanilla Cheesecake a success: 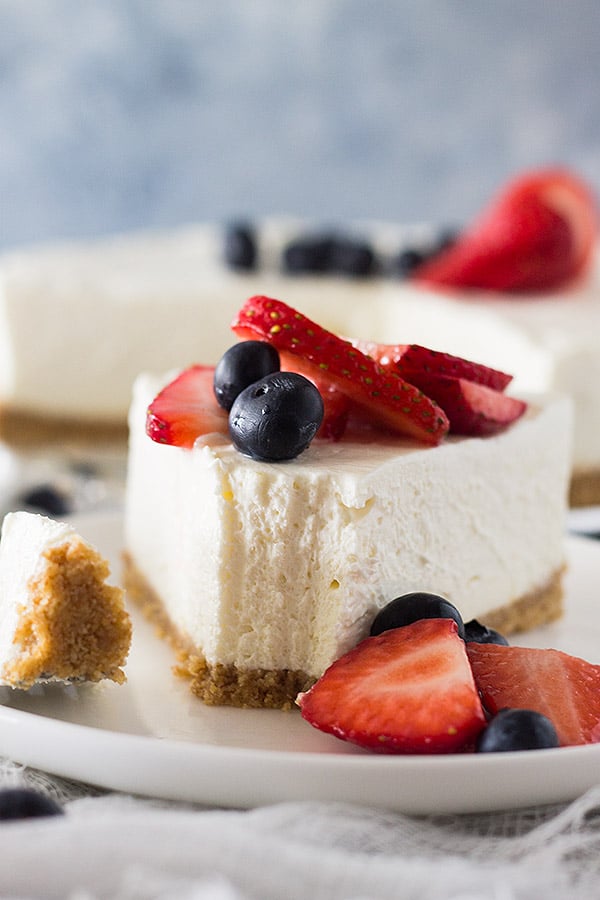 Let’s get started making the no bake cheesecake:

First, you will start by beating the heavy whipping cream with the powdered sugar and vanilla.  Like I said earlier, the cream needs to be really cold.  Start off by beating at a medium speed.  This way it will start to incorporate air without splashing the cream everywhere.  Once it starts to thicken a little take the mixer up to high and beat until stiff peaks form.

What are stiff peaks???  Well, when you pull the beater or beaters out of the whipped cream the peak will hold its shape.  It should come to a peak with the tip slightly curling.  Don’t go much past this or it will quickly become overwhipped. 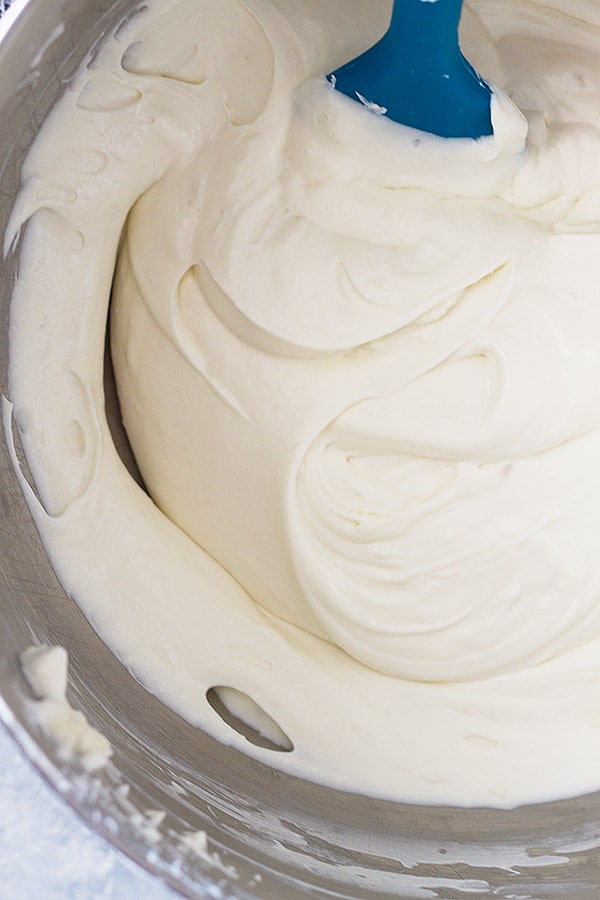 Now spread it out evenly on top of that Homemade Graham Cracker Crust.  I like to make these in a springform pan and for two reasons.  It gives the look of a traditional baked cheesecake and it makes it a whole lot easier to cut and serve into nice slices.  Trust me on that last one!

This no bake cheesecake does require some chilling time.  It will need to chill in the refrigerator for at least 4 hours.  But I like it to chill overnight.  For some reason, I think it tastes better.   This cheesecake is the perfect canvas for all sorts of toppings.  Fresh fruit of all kinds, jams, fruit fillings, and even chocolate.  The sky is the limit when it comes to toppings for this easy peasy no bake vanilla cheesecake! 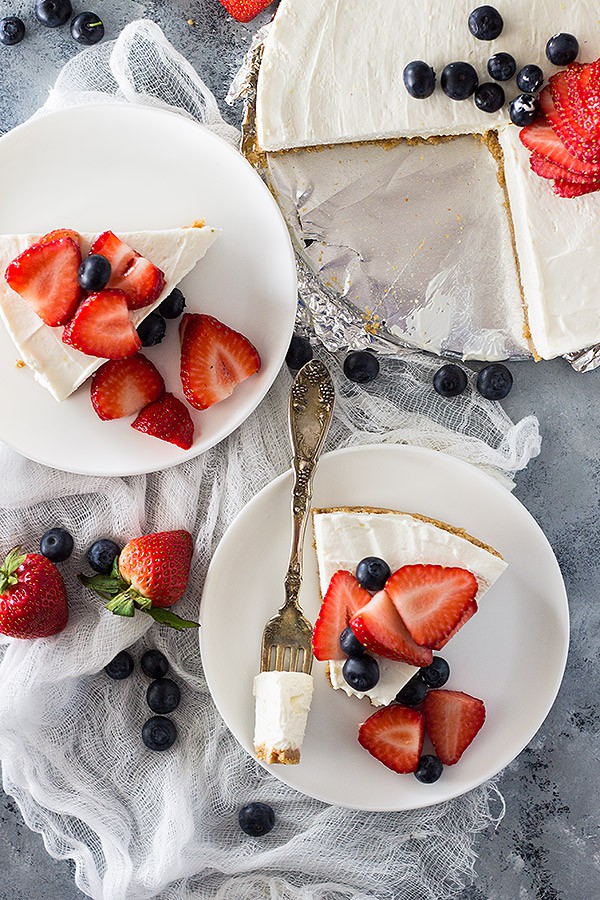 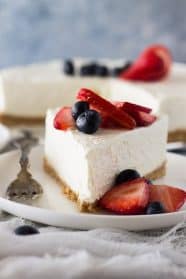