This Cinnamon Swirl Bread is a slightly sweetened fluffy white bread that wraps around a cinnamon sugar center that’s absolutely divine! Enjoy the bread as-is, make some French Toast out of it, or slather it in your topping of choice. Your cinnamon swirl loaf is going to take your kitchen to the next level!

Why I Love This Recipe for Cinnamon Swirl Bread

Start your day off right with cinnamon toast and a cup of joe! This cinnamon swirl is absolutely divine because the cinnamon sugar is already baked into the bread – no need to add it on top!

If you want to take up a notch in terms of cinnamon goodness, you can always add more cinnamon sugar. Or, you can soak your delicious bread in a milk and egg mixture and use it to make French toast! Talk about a burst of flavor! You could also slather on some peanut butter, or some butter and honey. There isn’t a single bad way to enjoy this bread!

All this talk of the bread has me craving some, which is a real shame because the whole loaf was gobbled up shortly after shooting the pictures for this post. I hope it makes it to the French bread stage for you, but if not, there’s always the next loaf.

As you’re reading through the recipe, keep in mind that you don’t have to roll your dough the way I did in these pictures – I was just trying something new. It turned out pretty well, but it did cause some of the cinnamon and butter to leak out so I’ll probably stick to the usual way from now on. As for you, do what works! There are no rules here except to load it up with cinnamon sugar deliciousness!

Something I think is so cool about bread is that 1. It’s always good, and 2. You pretty much make it the same way every time with the exception of a few ingredients. This is great because once you master one bread, you can feel confident making a bunch of others (I may or may not have a list of additional breads to make at the end of this post by the way)!

Instructions for Making This Bread

In a small bowl, combine the milk and yeast and give it a little swirl. Let the dish set for 5 minutes. This mixture should be bubbly, so if it’s not, your yeast has gone bad.

In a large bowl, combine the egg, melted butter, sugar, salt, and flour with the yeast mixture. Stir it by hand until the dough forms a nice soft ball, adding in more flour if it seems necessary. Be mindful to not add too much flour because the dough should be slightly sticky to the touch.

Turn the dough out onto a well-floured work surface and kneed it for about 10 minutes. Afterward, place it back into a floured bowl and cover it with a damp cloth to allow it to rise for 30 minutes. Tip: A warm area will make the dough rise faster.

Punch the dough down (yes, literally punch it) and roll it into a 14×9-inch rectangle. Spread the dough with 2 tablespoons of softened butter. Mix the brown sugar and cinnamon together and sprinkle it over the butter. Roll up the dough and pinch the edge to seal the dough. Place it in a greased 9×5 or 8×4 loaf pan seal side down. Cover it once again and let it rise until it’s nearly doubled in size, about 30 minutes.

Bake in a 350-degree F oven for 25-30 minutes or until the bread sounds hollow when you tap on it. If your bread starts to brown too much, loosely cover the bread with foil in the last 10 minutes of baking. Remove the pan from the oven and allow the bread to cool before slicing. Enjoy!

Can I freeze this bread?

This bread freezes well so make a couple of loaves! One to devour shortly after it comes out of the oven and another to use to make wonderful french toast. Just wrap it up and throw it in the freezer, then allow it to defrost in the fridge or in the microwave in 30-second intervals.

What are the four main ingredients in bread?

The four main ingredients in bread are flour, yeast, salt, and water. Once you get used to making your own dough and allowing it to rise for the right amount of time, you can then add different ingredients to make your bread your own!

Can I substitute regular flour for bread flour?

Yes – you’d substitute regular flour for bread flour at a 1:1 ratio. The texture may come out slightly different (in terms of the chewiness), but it’ll still be great bread!

Thanks so much for reading! Enjoy your cinnamon swirl bread and let me know what you think! 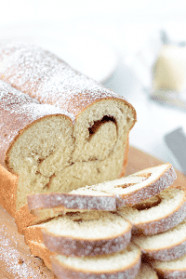