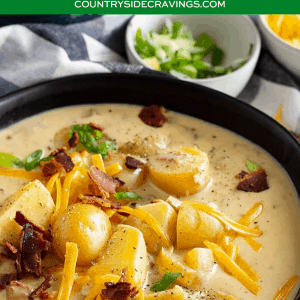 This Creamy Potato Soup is the ultimate comfort food! It’s made with simple ingredients, no cream soups, and made on the stove top in under 30 minutes.

Has anyone else been craving super simple comfort foods lately??? I sure have been and I tested out a ton of soups but you know which one won…..this creamy potato soup!

It’s been on the blog for quite a while but was in need of a serious face lift. Plus, I’ve changed the way I make the soup over the years so I thought I would share that with you.

How do you thicken potato soup?

There are several ways you can thicken potato soup. Many are gluten-free options as well!!

Can I freeze potato soup?

I know some say you can’t freeze cream soups but I have with no problem. Just note that the soup will be thicker so you will probably need to thin the soup with a little more milk when reheating.

Also reheating gently is key. Just reheat on low and stir frequently to prevent the soup from scorching. 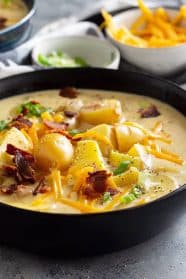 This Creamy Potato Soup is the ultimate comfort food! It's made with simple ingredients, no cream soups, and made on the stove top in under 30 minutes.

What to serve with Creamy Potato Soup