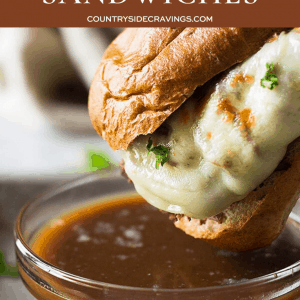 An easy recipe for Slow Cooker French Dip Sandwiches! These are filled with tender and flavorful beef, melty cheese and a beefy au jus for dipping!

I have an insanely easy recipe for slow cooker french dip sandwiches that I have been making for years and thought it was high time I share it with you.

It’s a family favorite, all the kiddos love it and I think it has to do with the fact they get to dip their sandwich in the au jus.  Something about that just makes them smile.

I love it because it is so stinkin’ easy thanks to my handy dandy crockpot!!  You just have to assemble the sandwiches and melt the cheese.  See nothing to it.

Oh, and straining the au jus is entirely up to you.  When we are just eating it ourselves I don’t usually strain it but if I make it for company then I do.

And since we are making this in the crockpot that au jus will be so flavorful and so will the meat.  The meat will also be super tender making it perfect for a sandwich!

I usually keep my french dip sandwiches pretty straight forward and simple.  I have used other spices and seasonings in the past but always come back to making it this way.

Nothing super fancy just simple goodness with melted cheese and a crusty bun.

What to Serve with French Dip Sandwiches 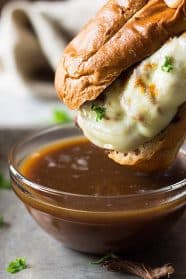 An easy recipe for Slow Cooker French Dip Sandwiches! These are filled with tender and flavorful beef, melty cheese and a beefy au jus for dipping!